Hi everyone! I’ve been back since Saturday, but I didn’t really get the chance to write anything until today. I don’t have a fiction story or anything, but I do want to tell you guys about my trip upstate.

My trip upstate was great, even though it didn’t turn out how I expected. I was planning on going up by myself, but my dad decided to go up as well. I don’t know if I told you guys, but I have a decent amount of property up in New Paltz, 18 acres. There’s a lot of open space, but there’s also a lot of woods with paths going through.

I decided to make a little spot in the woods where all these scrub pines that my dad and uncles planted are dying.

This is the aftermath. I managed to get it down in a little less than three hours. I had to use an axe because the chainsaw we have is probably around 30 years old and my uncle refuses to open up the one my cousin got him for reasons unknown to anyone.

You can’t see it in the picture, because it wasn’t planted yet, but I put in a dogwood tree a little to the left of where the tree fell. 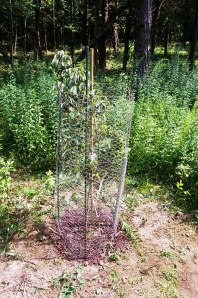 This is the dogwood. It was also a giant pain in the ass to put in the ground because we have horrible soil. In fact, it’s mostly clay and roots and rocks. You can barely get the shovel more than a couple inches into the ground without hitting a root or rock. It was extremely hard work, but at this point, I’m used to it and the end result always makes it worth it. I’m going to clear out a lot of that tall grass and make a little wildflower patch.

Other than back breaking work, I also went around and took pictures. It was interesting taking this picture because on the way, I almost killed a deer that jumped out in the road as I was driving to this spot.

My uncle showed me this spot a couple years ago. The rock that you see in the foreground are insanely striated from (I’m assuming) the glaciers that passed over.

Well, I’ll try to have something for you all sometime this week. And in case you were wondering, these were all taken with my dad’s old pentax. The film is just cheap fujifilm.

This site uses Akismet to reduce spam. Learn how your comment data is processed.